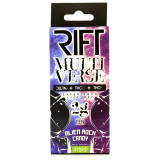 Come with us, were going to the multiverse with Rift.

You only need one thing though to enter the multiverse, the new Rift Alien Rock Candy Multiverse 2G disposable!

Every puff you take is gonna be loaded with a blend of Alien Rock Candy terpenes, which is a hybrid strain.

2 grams of the best cannabinoid blend in the space right now, and that's a blend of complaint Delta-9 THC, THC-O, and THCP!

We of course explain what you can expect from these cannabinoids in much further detail down below. So you know exactly what to expect before they even enter your body!

Don't rush off too quick, let's talk about the legality of your Rift Alien Rock Candy Multiverse 2G disposable..

Which was legalized in the 2018 Farm Bill that states isomers, cannabinoids, extracts, and derivatives are legal as long as the final product does not contain more than 0.3% Delta-9 THC by volume.

However even though it is federally legal doesn't mean that it is in your state.

Due to THCP/THC-O either being illegal or not explicitly legal according to state laws, this product does not ship to the following states: Alaska, Arizona, Arkansas, Colorado, Conneticut, Delaware, Idaho, Iowa, Knetucky, Michigan, Mississippi, Montana, Nevada, North Dakota, Rhode Island, Utah, Vermont, and Washington.

It's amazing that your Rift Alien Rock Candy Multiverse 2G disposable comes with 2 grams of distillate, because as we all know 2 is certainly always better than 1!

With all that distillate there is one problem that may come to your mind immediately... and that is a dead battery.

Well that's the past since every pen comes with a USB-C charging port at the base of the device to charge if it dies before you get to indulge in all that wellness!

Make sure you know exactly what you're getting and putting into your body with your wellness products by looking at the 3rd party lab reports. Which we placed below for you or you can also scan the QR code on the product to check the COAs.

What should you be prepared for when you take that first puff?

The Alien Rock Candy strain offers a hybrid blend of terpenes to give you an all day product that can either help you get pumped up or help you relax after a long day.

So we do not recommend operating heavy machinery or driving while using the Rift Alien Rock Candy Multiverse 2G disposable.

Each of the Rift Alien Rock Candy Multiverse 2G disposables are stuffed with a concentrated dose of Delta-9 THC, THC-O, and THCP!

Delta-9 THC is the psychoactive compound in cannabis, and its high prevalence in the marijuana plant is why this particular substance is federally illegal.

Delta-9 THC is a cannabinoid which can be derived from both cannabis and hemp.

THC-O-acetate is a unique cannabinoid unlike any other that is associated with the hemp plant.

THC-O is produced in a lab, starting with CBD isolate which is first converted into delta-8 THC.

The delta-8 is then combined with acetic anhydride, which transforms the cannabinoid into THC-O acetate or better known as THC-O that features its own unique traits and properties.

THC-O has been shown to be more psychoactive than Delta-8 THC. So if this is your first experience with this cannabinoid please use mild doses until you know how your body reacts to this cannabinoid.

But, how potent is the high?

How to Use the Rift Alien Rock Candy Multiverse 2G Disposable

To use your Rift Alien Rock Candy Multiverse 2G Disposable press the button 5 times to power on/off the device. After powered on, press button 2 times to pre-heat. Press and hold button 1-3 seconds and inhale.

To preserve the outstanding quality of your Rift Alien Rock Candy Multiverse 2G Disposable, please store in a cool, dry place away from excessive heat, light, or humidity.

The Rift Alien Rock Candy Multiverse 2G Disposable is not to be used during pregnancy or lactation. If you have a medical condition or take pharmaceutical drugs, please consult your physician before use. Keep out of reach from children.

Sugar Extrax
$38.99
Sugar Extrax Sour Tsunami Disposable - 2 Grams of Delta-8 THC, Delta-10 THC, & THC-O - Sativa You ready to have a tsunami of energy come over you with a simple draw of a Sugar Extrax disposable...
Sale 13%

Urb Extrax
$39.99
Urb Extrax Zenergy Unwind THCV Disposable Vape Pen - THC-V, Delta-8, Delta-9, Delta-10, and CBN - Indica Our friends over at Urb Extrax want to personally knock you out every night! But, in a good...
Sale 40%

Wellicy
$40.00
$23.99
Wellicy Space Head Delta-8 THC Cartridge - 850mg of Delta-8 THC - Hybrid Alright, we here at Wellicy have been hearing from all these companies that they sell the best delta-8 on the market...
Options